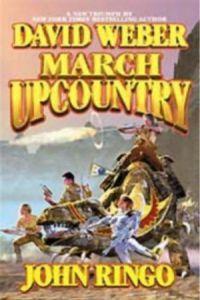 He was young, handsome, athletic, an excellent dresser, and third in line for the Throne of Man ... so why wouldn't anyone at Court trust him.

Why wouldn't even his own mother, the Empress, explain why they didn't trust him Or why the very mention of his father's name was forbidden at Court Or why his mother had decided to pack him off to a backwater planet aboard what was little more than a tramp freighter to represent her at a local political event better suited to a third assistant undersecretary of state

It probably wasn't too surprising that someone in his position should react by becoming spoiled, self-centered, and petulant. After all, what else did he have to do with his life.

But that was before a saboteur tried to blow up his transport. Then warships of the Empire of Man's worst rivals shot the crippled vessel out of space. Then Roger found himself shipwrecked on the planet Marduk, whose jungles were full of damnbeasts, killerpillars, carnivorous plants, torrential rain, and barbarian hordes with really bad dispositions. Now all Roger has to do is hike halfway around the entire planet, then capture a spaceport from the Bad Guys, somehow commandeer a starship, and then go home to Mother for explanations.

Fortunately, Roger has an ace in the hole: Bravo Company of Bronze Battalion of The Empress' Own Regiment. If anyone can get him off Marduk alive, it's the Bronze Barbarians.

Assuming that Prince Roger manages to grow up before he gets all of them killed.

At the publisher's request, this title is sold without DRM (Digital Rights Management).

Granted, the decade has just begun, but David Weber shows all signs of being the science fiction phenomenon of the decade. Weber is often compared to C.S. Forester (celebrated creator of Captain Horatio Hornblower) for his novels of the exploits of starship commander Honor Harrington, the most recent of which was the New York Times, Wall Street Journal, Publishers Weekly, and Amazon.com bestseller, Ashes of Victory. Weber's work ranges from epic fantasy (Oath of Swords, The War God's Own) to breathtaking space opera (Path of the Fury, The Armageddon Inheritance) to military science fiction with in-depth characterization (the awesomely popular Honor Harrington novels). Weber lives in South Carolina and, in spite of having gotten married a year ago, shows no sign of slowing down. . . .

John Ringo had visited 23 countries and attended 14 schools by the time he graduated high school. This left him with a wonderful appreciation of the oneness of humanity and a permanent aversion to foreign food. A veteran of the 82nd Airborne, he later studied marine biology, but the pay was for beans, so he turned to quality control database management (much higher-paying). Then Fate took a hand, and he now is in the early stages of becoming fabulously wealthy, which his publisher has ASSURED him is the common lot of science fiction writers. With his bachelor years spent in the Airborne, cave diving, rock-climbing, rappelling, hunting, spear-fishing, and sailing, the author is now happy to let other people risk their necks. He prefers to read (and of course write) science fiction, raise Arabian horses, dandle his kids and watch the grass grow.
Tweet

Great military SciFi with a spoiled rich prince who turns into much more
May 16, 2016
Rating
5.0
Empire of Man is a great series and as soon as I read this first book, March Upcountry, I found myself reading the second book.

This first book is probably the best and you are introduced to a great character in Roger Ramius Sergei Chiang MacClintock.  He is the prince of a powerful empire that spans numerous worlds and is used to living a very privileged life.  However, as the third born no one ever took him seriously and he gained a well-desired bad reputation.  Suddenly, he is shipwrecked on a backward planet with his bodyguards.  They may be sworn to protect him but that doesn't mean they have to listen to his whining.

Will Sir Roger have any useful skills to help the group survive and how will futuristic soldiers with limited resources protect their prince against a deadly foreign world?

I really liked both the characters and the exciting action and adventure in this series.  I rate it a five out of five starts and recommend it to those that enjoy military SciFi, great characters, or just great books.
F
Fwwadmin #1 Reviewer 122 reviews
Report this review Comments (0) | Was this review helpful to you? 0 0