Books SciFi Gods of the Machines

Gods of the Machines 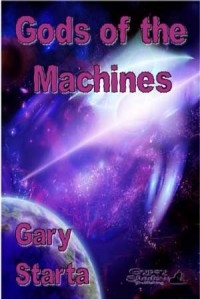 Author
Gary Starta
Detective Sam Benson, a native New Yorker, is brash, opinionated and candid. Transplanted to work on Earth's first colonized planet, he envisions a relatively peaceful job. But Benson's ruthless nature might bring it to the brink of annihilation when a series of murders begins. He suspects a non-human is responsible-an android who once shared engrams with a psychopathic human. However, the detective doesn't know other non-humans once called his new world-theirs. And as Benson obsesses with making a case against the android, he is oblivious to their return and the reason why they consider machines to be their gods.
Tweet

interesting twist on SciFi for fans of both traditional sci fi and murder mysteries
April 17, 2016
Rating
5.0
Gods of the Machines by Gary Starta is the latest Sci Fi novel I have read and I recommend it to any adult fan of good characterization in their fantasy stories.  The story begins with an adult male and female that are in charge of exploring an unknown part of the planet Cerses and end up exploring each other sexually.

As such I would only recommend this book to adults and found the story seemed more like a romance novel than a Sci Fi novel at he beginning.  The lady is then murdered and the man who had the adulterous relationship with her is the obvious main suspect. However, the plot then develops around Sam and Sandra as the detective and CSI responsible for determining who murdered the woman.  Sam and Sandra came to Cerses as a couple soon to get married but find their relationship on hold and their feeling about each other in question.

Sam believes that the android, James Starkman, is the primary suspect not only in the initial murder but several that follow.  Like all good Sci Fi stories there are mysteries and unbelievable events that happen that will make you want to come back for more.  What I enjoyed was the deep characterization and the feeling of hope and community that comes through in the story.  I did find the solving of the murder case to be a little rushed but overall enjoyed the world and characters and things this story would be a good one for both experienced and new fans of Sci Fi.  I would rate this book a 5 out of 5 for good characterization and interesting twist on sci fi and recommend it for adult fans of both traditional sci fi and murder mysteries.