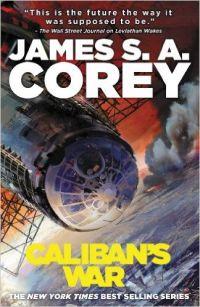 We are not alone.

On Ganymede, breadbasket of the outer planets, a Martian marine watches as her platoon is slaughtered by a monstrous supersoldier. On Earth, a high-level politician struggles to prevent interplanetary war from reigniting. And on Venus, an alien protomolecule has overrun the planet, wreaking massive, mysterious changes and threatening to spread out into the solar system.

In the vast wilderness of space, James Holden and the crew of the Rocinante have been keeping the peace for the Outer Planets Alliance. When they agree to help a scientist search war-torn Ganymede for a missing child, the future of humanity rests on whether a single ship can prevent an alien invasion that may have already begun . . .

New classic SciFi in the making and better than the Expanse TV show
June 14, 2016 (Updated: June 19, 2016)
Rating
5.0
I have been really enjoying The Expanse series both as a book and the first season of the tv show. This second book will give you a heads up on what you will see in the second season.

You get all of the main characters crewing the Rocinante and several new ones. The story starts with Bobbi, a Martian marine, as the only survive of a monster attack. Bobbi finds herself working for an Earth politician as their planets are on the verge of war.  Another major plot line involves the crew helping a scientist in search of his kidnapped daughter.

Caliban's War shows how having great characters that are put into difficult moral situations leads to a great book which is why I give it five out of five stars.  I believe I am seeing the beginning of an all new science fiction classic in The Expanse.
F
Fwwadmin #1 Reviewer 122 reviews
Report this review Comments (0) | Was this review helpful to you? 0 0