Books Fantasy The Bands of Mourning: A Mistborn Novel

The Bands of Mourning: A Mistborn Novel 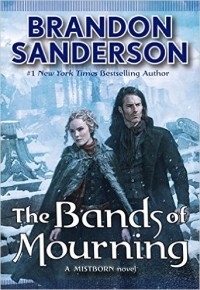 
With The Alloy of Law and Shadows of Self, Brandon Sanderson surprised readers with a New York Times bestselling spinoff of his Mistborn books, set after the action of the trilogy, in a period corresponding to late 19th-century America.

Now, with The Bands of Mourning, Sanderson continues the story. The Bands of Mourning are the mythical metalminds owned by the Lord Ruler, said to grant anyone who wears them the powers that the Lord Ruler had at his command. Hardly anyone thinks they really exist. A kandra researcher has returned to Elendel with images that seem to depict the Bands, as well as writings in a language that no one can read. Waxillium Ladrian is recruited to travel south to the city of New Seran to investigate. Along the way he discovers hints that point to the true goals of his uncle Edwarn and the shadowy organization known as The Set.

Great fantasy series with some superheroic action
April 27, 2016 (Updated: April 27, 2016)
Rating
5.0
Bands of Mourning was the first book I have read in the Mistborn world but it won't be my last.  As a huge fan of superhero comics I loved reading about Waxillium, Wayne and the rest of their unusual group of adventures.  Waxillium reminds me of Batman as he uses his detective abilities and a special belt to fight crime.  Wayne has healing powers and an unusual view of personal ownership which reminds me of Wolverine.

Waxillium is a lawman in a world similar to the late 19th-century but with some major twists.  He has two powers in that he can make his body very heavy and also propel himself against any small amount of metal in order to fly.

In this book Wax, Wayne, and their friends are searching for Wax's missing sister and two find the magical bands of mourning which as legend has it will grant the wearer incredible powers.

What makes this book great are the characters.  Wax had tragically lost his first wife and is about to marry again which will increase both his status and that of his bride-to-be.  She is a well-prepared woman that always writes lists of all the likely things to happen.  This makes for an interesting couple since Wax is always in the middle of some surprising event including their wedding at the beginning of the book.  And who can't love Wayne who always is finding something to "trade" with someone with him leaving an old shoe or something in exchange.

This book includes a lot of action and SciFi elements and most people who love fantasy or SciFi will find something to like. I give it five out of five stars and will look for more Mistborn books in the future.