Son of The Black Sword 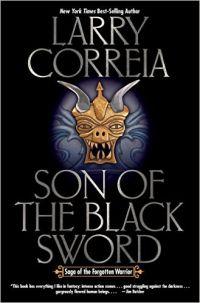 After the War of the Gods, the demons were cast out and fell to the world. Mankind was nearly eradicated by the seemingly unstoppable beasts, until the gods sent the great hero, Ramrowan, to save them. He united the tribes, gave them magic, and drove the demons into the sea. Ever since the land has belonged to man and the oceans have remained an uncrossable hell, leaving the continent of Lok isolated. It was prophesized that someday the demons would return, and only the descendants of Ramrowan would be able to defeat them. They became the first kings, and all men served those who were their only hope for survival.

As centuries passed the descendants of the great hero grew in number and power. They became tyrannical and cruel, and their religion nothing but an excuse for greed. Gods and demons became myth and legend, and the people no longer believed. The castes created to serve the Sons of Ramrowan rose up and destroyed their rulers. All religion was banned and replaced by a code of unflinching law. The surviving royalty and their priests were made casteless, condemned to live as untouchables, and the Age of Law began.

Ashok Vadal has been chosen by a powerful ancient weapon to be its bearer. He is a Protector, the elite militant order of roving law enforcers. No one is more merciless in rooting out those who secretly practice the old ways. Everything is black or white, good or evil, until he discovers his entire life is a fraud. Ashok isn’t who he thinks he is, and when he finds himself on the wrong side of the law, the consequences lead to rebellion, war—and destruction.

At the publisher's request, this title is sold without DRM (Digital Rights Management).

Drizzt has competition for the best fantasy swordsman in Ashok
June 13, 2016 (Updated: June 14, 2016)
Rating
5.0
Ashok is a highly efficient killing machine who begins as a single-minded 20-year veteran of The Protectors, whose mission is to serve as judge, jury, and executioners of anyone who breaks The Law. The book begins with him defeating two huge demons which only serve as a warmup to the action yet to come.

Ashok's leader gives him a choice to either take a well-deserved retirement or find out a secret that will change the entire world.

There are at least two things I really liked about this book.  The first is that with the enhanced physical abilities provided by The Heart of the Mountain and the combat abilities from the ancient and sentient black sword, Angruvadal, Ashok is nearly invincible.  He has incredible speed, strength, endurance, healing, and combat awareness that allows him to fight and beat up to 50 men at a time.  He very much reminds me of Drizzt from the Forgotten Realms series by R.A. Salvatore because of both his skills and single-mindedness.

The other thing I liked was the background story that developed as I read. I began reading about a highly skilled swordsman who lives in a world with demons but I also learned about the history of the world, the politics, and the social-economic status of the people.  There are several people that you get to know including the political Inquisitors, Ashok's previous friend from the Protectors, a librarian who searches the history books for secrets and more.

If you are looking for an action-packed, well-written new fantasy series within a beautiful yet scarred world you must read Son of the Black Sword.  I give it five out of five stars.