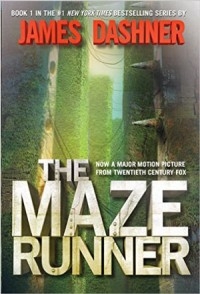 Author
James Dashner
Series
The Maze Runner
Book # in Series
Book 1 of 5
Read the first book in the #1 New York Times bestselling Maze Runner series, perfect for fans of The Hunger Games and Divergent. The Maze Runner, and its sequel The Maze Runner: The Scorch Trials, are now major motion pictures featuring the star of MTV's Teen Wolf, Dylan O’Brien; Kaya Scodelario; Aml Ameen; Will Poulter; and Thomas Brodie-Sangster! Also look for James Dashner’s newest novels, The Eye of Minds and The Rule of Thoughts, the first two books in the Mortality Doctrine series.

When Thomas wakes up in the lift, the only thing he can remember is his name. He’s surrounded by strangers—boys whose memories are also gone.

Nice to meet ya, shank. Welcome to the Glade.

Outside the towering stone walls that surround the Glade is a limitless, ever-changing maze. It’s the only way out—and no one’s ever made it through alive.

Everything is going to change.

Then a girl arrives. The first girl ever. And the message she delivers is terrifying.

A good dystopian series with deadly robots
April 09, 2016
Rating
5.0
Kids and killer robots mix well together.  If you add in a maze and the fact that kids keep getting taken away by the robots each day you end up with and exciting book.

I enjoyed reading about all of the boys and how they coped with living in a deadly maze full of robots and one girl they didn't trust.

Yes, the movie was decent but the book was clearer to understand.  Throughout the series you slowly learn why the kids were put in the maze and what happened to the rest of the world.

I give it five out of five star for excellent pacing, suspense, and a tough group of main characters.  Those that liked Hunger Games and other dystopian books will find something to like in The Maze Runner series.
F
Fwwadmin #1 Reviewer 122 reviews
Report this review Comments (0) | Was this review helpful to you? 0 0