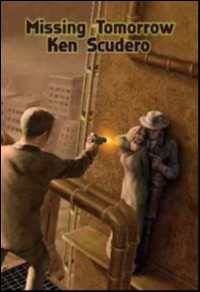 Author
Ken Scudero
On the planet Nibiru, in the year 500, private detective Gem Jupiter struggles against the oppressive weight of strange forces and desperate times. Jupiter specializes in paranormal conspiracies, and while forming a few of his own, the detective and his investigative group, The Tonic, uncover something sinister unfolding in the shadows.

Mutated fish washing up on the shores of Myopia City, meeting the girl of his dreams, discovering the frightening truth behind the elitist group the Selectmen - Jupiter would like to think it’s all in a day’s work, but the reality is, his actions may mold the future of the planet and its people. As the skies darken and the gloom closes in, only Jupiter and The Tonic can shine a light where it’s needed most.

The only question is, will it be bright enough to make a difference? (less)
Tweet

SciFi adventurer in a corrupt world
April 24, 2016
Rating
5.0
Missing Tomorrow is a new SciFi book by Ken Scudero that makes you think.  How would you handle being one of the few that know that your government is not just focused on their own selfish desires for power, money, and sex but also is purposely planning to kill off "undesirable" citizens.  This books revolves around detective, Gem Jupiter, who uncovers nasty secrets about his government and only he and his team have the knowledge and skills to do something about it.

Gem Jupiter as the main character and hero if this book but he isn't very heroic at first.  The story starts by telling of his background as a great student and athlete who five years ago started a successful detective group called the Tonic.  He had solved several mysteries and was happy with his career accomplishments.  However, when he is called to investigate mutant fish he seemed to give up way to easily on a mystery that was obviously just the type of case he specialized in.

Gem's friends and partners in The Tonic, Jenny and Fabo, questioning his resolve and it all starts to make sense. Gem had been taking what he thought was simple vitamins but Jenny discovers are actually drugs created to destroy the part of a person's mind that makes a person question things.  Luckily the problem is solved early enough and Gem gets back to his old self.  But what do you do in a world that is corrupt but everyone else is too high on drugs or Vegas-style entertainment to even notice an alien spacecraft land nearby?

This book made me really think about how people make choices in their lives and I am sure the author, Ken Scudero, did this on purpose.  Many people in this book barely survive in a world of high inflation, low standard of living, and reliance on government sold mind controlling drugs.  Is this world really that different from what our world could be?  A group called the Elite control all of the wealth, promote prostitution as one of the best jobs for young women, and live in a separate city from the "average citizens".

How will Gem Jupiter help his world when the people don't believe him and he is against a powerful government that could easily kill him?  I will let you read the book to find that out.

I enjoyed this book and recommend it to anyone looking for a good SciFi book that focuses on one man who feels responsible for saving his entire world from destruction.  I give it 5 out of 5 stars because of the way the story can increase your awareness about society.  I also found Gem to be an interesting character that was never exactly what I expected him to be but was truly special because he believed in himself and his convictions.