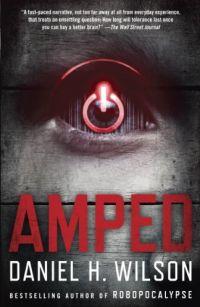 Technology makes them superhuman. But mere mortals want them kept in their place. The New York Times bestselling author of Robopocalypse creates a stunning, near-future world where technology and humanity clash in surprising ways. The result? The perfect summer blockbuster.

As he did in Robopocalypse, Daniel Wilson masterfully envisions a frightening near-future world. InAmped, people are implanted with a device that makes them capable of superhuman feats. The powerful technology has profound consequences for society, and soon a set of laws is passed that restricts the abilities—and rights—of "amplified" humans. On the day that the Supreme Court passes the first of these laws, twenty-nine-year-old Owen Gray joins the ranks of a new persecuted underclass known as "amps." Owen is forced to go on the run, desperate to reach an outpost in Oklahoma where, it is rumored, a group of the most enhanced amps may be about to change the world—or destroy it.

Once again, Daniel H. Wilson's background as a scientist serves him well in this technologically savvy thriller that delivers first-rate entertainment, as Wilson takes the "what if" question in entirely unexpected directions. Fans of Robopocalypse are sure to be delighted, and legions of new fans will want to get "amped" this summer.

Fast paced story with plenty of action
October 06, 2016
Rating
5.0
I have listened to Amped as an audio book twice now and think it is an excellent example of dystopian science fiction. The main character, Owen, is a young man with unique cybernetic implants that make him an "amp". "Amps" have no rights and are treated more like animals than people. The average implants transforms children with learning difficulties into super intelligent or athletic kids that normal kids just can't compete with.
And then there is Owen who thought his physician father gave him an average implant that just keeps him from having epileptic seizures but in reality makes him one of the most powerful people on earth.
The world is a dangerous place where super-powered "amps" battle in gladiatorial contests and Amps are restricted to concentration camp-like towns.
All this is bad enough but violence is bubbling up and Owen can't tell friend from foe or what is motivating others to act as they do. Owen needs to decide how deep into his amp he will go and what he will do with those powers if he activates them.
Amped is a fast paced story with plenty of action and dangerous situations and I recommend it to those that like either science fiction or dystopian fiction. I give it five out of five stars.
F
Fwwadmin #1 Reviewer 122 reviews
Report this review Comments (0) | Was this review helpful to you? 0 0